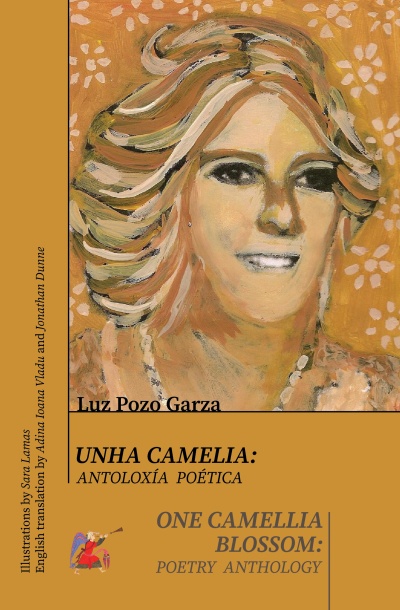 This book sets out, in a bilingual Galician-English edition, to present the work of one of Galicia’s best-known contemporary poets, Luz Pozo Garza. The book contains six poems that, according to the translator Adina Ioana Vladu in her introduction, “constitute a small cycle dedicated to the Galician poet, writer, and feminist scholar Carmen Blanco, author of essays and critical editions of Luz Pozo Garza’s poetry, and the poet, essayist, and author of short stories Claudio Rodríguez Fer”. The writer of the introduction continues, “The choice of this particular set of poems is explained by its special significance within the poet’s ample work: it is a hymn to sorority, following the red thread connecting the Chinese twelfth-century poet Li Yian (better known as Li Qingzhao), Rosalía de Castro, Luz Pozo Garza, and Carmen Blanco; an exaltation of the universality of love, as the symbol of the lovers, the ‘mythical couple’, extends from Dante and Beatrice to Luz Pozo and Eduardo Moreiras to Carmen Blanco and Claudio Rodríguez Fer; and an ode to the poet’s homeland and language.” It is to be hoped that this anthology will serve as an introduction to one of the most celebrated and mystical voices of contemporary Galician poetry. Also included is the Proust Questionnaire that the poet answered for the cultural magazine Evohé in 2010, translated by Jonathan Dunne.